*NOTE: This photo by Jon Hammond appears on page 125 in the Bernard Purdie book “Let The Drums Speak” – since I wasn’t credited I will give my own credit. I have the original photograph – JH

Soundcheck Time at BB King’s 42nd Street with Bernard Purdie flanked by Miho Nobuzane from Osaka – piano and Tetsuya Sato from Tokyo – bass –
Jon Hammond – 7.30PM hit tonight with a second set at 10PM – Bernard just put up his signature Sabian cymbals – looks like he is playing some Canopus drums ce soir (this evening) – no cell phone reception down in BB King’s folks,

#TheNAMMShow Jon Hammond with a very important NAMM announcement!
Just saw my friend Michel Lâg by the coffee…great Luthier of Lâg Guitars world wide, and many years ago we were in the AFN TV Movie “Sound Cops” – yes we know the Sound Cops very well! They are our friends (most of the time!)

it was great running in to my friend Bob Mintzer tenor saxophonist extraordinaire, looking good Bob! 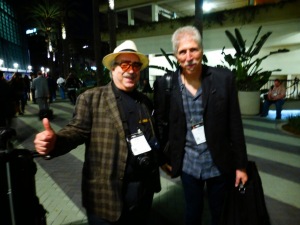 It was really great to see my friend Jeffrey Hu from Pmauriat Albest / PMauriat Saxophones at Winter NAMM, all the way from Taipei, looking real good Jeffrey!

It was so great to see Klaus-Michael Polten one of my original original Sennheiser friends on the scene at NAMM – all the way from Wedemark, looking good!

– Jon Hammond — at The NAMM Show

– Jon Hammond — with Patrick Trahan at The NAMM Show

Great to see our friends from Norway here in San Francisco today!
Øivin Fjeld Mona Levvel – Jon Hammond Jon Henrik Pettersen
at one of my favorite places: China Beach, nearby the house that belonged to the late great Robin Williams

— with Øivin Fjeld and Jon Henrik Pettersen at The NAMM Show

So great to see my dear friends from Bespeco Accessori!
useful imagination — innovation with style and… passion! – from beautiful Castelfidardo Italy!

– Jon Hammond #TheNAMMShow — with Bespeco Accessori at The NAMM Show

The Famous Gator Cases Gator at Winter NAMM Show! You can see my Gator case, it’s a real game changer – the molded flight case knocked off a good 20+ pounds off of my check in weight and the case is really strong & protective, handle easy on the hand and very rugged! Highly recommend from our good friends from the State of Florida http://www.gatorcases.com/ L to R: Jon Hammond Gator, Joe Berger — with Joe Berger

Brian Auger the man with his son Karma Auger who is now carrying the hits for Brian Auger Oblivion Express once again world wide, Alex and myself Jon Hammond – lifting my soul here in Anaheim NAMM time pause for the cause — with Brian Auger, Alex Ligertwood and Karma Auger at Hilton Anaheim