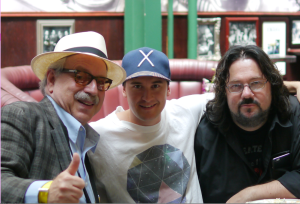 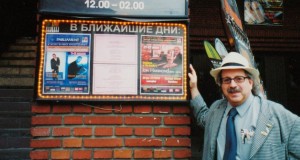 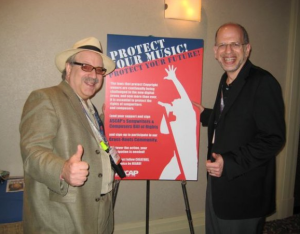 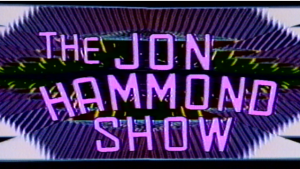 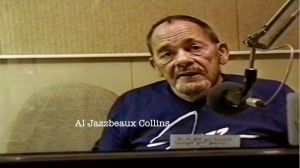 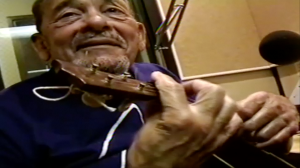 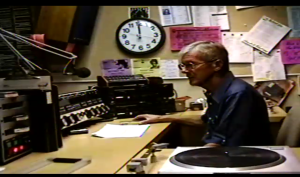 The late great radio and TV broadcaster personality Al Jazzbeaux Collins in the studios of KCSM Jazz 91 with organist Jon Hammond – aka Al Jazzbo Collins, one of the greatest and most definitely coolest broadcasters who ever lived. *Note: I dearly miss Jazzbeaux, he was a huge inspiration to me personally. He broke out my music on the air back in New York on WNEW 1130AM huge powerful door he opened for me, we had a lot of fun together on both coasts – he introduced me to folks like Lionel Hampton, David Panama Francis, Lew Anderson band leader and Clarabell the Clown from It’s Howdy Doody Time! TV Show, Joe Bushkin pianist, and his Family the Collins Family – he knew every door man garbage man and taxi drivers on the street – rest in peace Albert! sincerely, Jon Hammond *including a clip from Live performance in Horizons Sausalito with funky James Preston drums on Jon Hammond Band https://en.wikipedia.org/wiki/Al_%22Jazzbo%22_Collins Albert Richard “Jazzbo” Collins (born January 4, 1919, Rochester, New York[1] — d. September 30, 1997, Marin County, California) was an American disc jockey, radio personality and recording artist who was briefly the host of NBC television’s Tonight show in 1957.

The name “Jazzbo” derived from a product Collins had seen, a clip-on bowtie named Jazzbows. Just as Martin Block created the illusion that he was speaking from the Make Believe Ballroom, Collins claimed to be broadcasting from his inner sanctum, a place known as the Purple Grotto, an imaginary setting suggested by radio station WNEW’s interior design, as Collins explained:

I started my broadcast in Studio One which was painted all kinds of tints and shades of purple on huge polycylindricals which were vertically placed around the walls of the room to deflect the sound. It just happened to be that way. And with the turntables and desk and console and the lights turned down low, it had a very cavelike appearance to my imagination. So I got on the air, and the first thing I said was, “Hi, it’s Jazzbo in the Purple Grotto.” You never know where your thoughts are coming from, but the way it came out was that I was in a grotto, in this atmosphere with stalagtites and a lake and no telephones. I was using Nat Cole underneath me with “Easy Listening Blues” playing piano in the background.
Collins grew up on Long Island, New York. In 1941, while attending the University of Miami in Florida, he substituted as the announcer on his English teacher’s campus radio program, and decided he wanted to be in radio. He began his professional career as the disc jockey at a bluegrass station in Logan, West Virginia. By 1943, Collins was broadcasting at WKPA in Pittsburgh, moving in 1945 to WIND in Chicago and in 1946 to Salt Lake City’s KNAK. In 1950, he relocated to New York where he joined the staff of WNEW and became one of the “communicators” on NBC’s Monitor when it began in 1955. Two years later, NBC-TV installed him for five weeks as the host of the Tonight show when it was known as Tonight! America After Dark in the period between hosts Steve Allen and Jack Paar.[2]

In 1957, Collins appeared, as himself, as the star of an episode of NBC radio’s science fiction radio series X Minus One. He also hung out with the beatnik hipsters in North Beach during that time. In 1959, he was with KSFO in San Francisco. While at KSFO he would often say that he was broadcasting “from the purpleness of the Grotto”. He often mentioned his assistant “Harrison, the long-tailed purple Tasmanian owl”. During the 1960s, he was the host of Jazz for the Asking (VOA), and he worked with several Los Angeles stations during the late 1960s: KMET (1966), KFI (1967) and KGBS (1968).

He officially changed the spelling of his name to Jazzbeaux when he went to Pittsburgh’s WTAE in 1969. He moved to WIXZ in Pittsburgh (1973) before heading back to the West Coast three years later. While in Pittsburgh, he briefly hosted a late night television show entitled “Jazzbeauxz (he spelled the possessive with a ‘z.’) Rehearsal”. The show had nothing to do with any actual rehearsal, and was entirely an eclectic sampling of anything that caught Collins’ interest at the time. One of those “interests” was a long-running hard-boiled-egg spinning contest. He conducted the program from a barber chair, as he had on a previous TV show.

In the early 1960s Collins hosted a morning TV program, “The Al Collins Show,” that aired on KGO-TV in San Francisco (the ABC affiliate). The format included light talk and guest appearances. The guest lineup typically included local or state-wide celebrities, and B-list actors, such as Moe Howard of The Three Stooges.

A popular segment on his show was the “no stinkin’ badges” routine. Al would politely request the main guest for that day don a Mexican bandit costume, complete with ammo belts crossing the chest, six-guns in holsters, a huge sombrero and large fake mustache. The guest then had to pose in front of cameras and for the TV audience. With pistols pointing at the camera lens the guest had to say (with emphasis) “I don’t got to show you no stinkin’ badges.” If the guest did not say it with sufficient sinister tone Collins made him or her repeat it until in Al’s opinion the guest got it right. Collins’ bit was a play on a famous exchange in the 1948 film The Treasure of the Sierra Madre. In one scene some obviously very bad bandidos try to pass themselves off to Bogart as federales (police). Humphrey Bogart’s character knows they are not federales but nevertheless asks to see some badges. The bandito-in-charge responds “Badges?! I don’t got no badges. We don’t need no badges! I don’t have to show you any stinkin’ badge.” Collins reduced the guest bandit’s lines to the single phrase so it was easy for the guest to recite.

In 1976 Al Collins returned to San Francisco working at KMPX, followed by a three-year all-night run at KGO which drew callers throughout the West Coast. He always opened with Count Basie’s “Blues in Hoss flat”. He also worked a late night shift at KKIS AM in Pittsburg, CA in 1980. After returning to New York and WNEW (1981), he was back in San Francisco at KSFO (1983) and KFRC (1986). Then came one more run at WNEW (1986–90), and then he joined KAPX (Marin County, California) in 1990, and from 1993 until his death, Jazzbeaux did a weekly jazz show at KCSM (College of San Mateo, California).

Artist Bio:
JON HAMMOND Instruments: Organ, Accordion, Piano, Guitar Attended: Berklee College of Music 1974, City College San Francisco Languages: English, German Jon is closely identified with the two main products of his career, the Excelsior Accordion and the Hammond Organ. Musician: Jon Hammond is one of the premier B3 PLAYERS in the world. Jon has played professionally since age 12. Beginning as a solo accordionist, he later played Hammond B3 organ in a number of important San Francisco bands. His all original group HADES opened shows for Tower of Power, Quicksilver Messenger Service and Michael Bloomfield. Eddie Money and Barry Finnerty became musical associates. Moving East he attended Berklee College of Music and played venues as diverse as Boston’s “Combat Zone” in the striptease clubs during the ’70’s and the exclusive Wychmere Harbor Club in Cape Cod, where he was house organist with the late great trumpet player Lou Colombo and developed a lasting friendship with House Speaker Tip O’Neill. He also toured the Northeast and Canada with the successful show revue “Easy Living”, and continued his appearances at nightclubs in Boston and New York. Subsequently Hammond lived and traveled in Europe, where he has an enthusiastic following. TV/Video Producer: In 1981 Jon formed BackBeat Productions. Assisted by Lori Friedman (Video by LORI), the innovative TV show “The Jon Hammond Show” became a Manhattan Cable TV favorite. Jon’s “Live on the street” video style included news events, as well as live music/video clips of Dizzy Gillespie, Paul Butterfield, Jaco Pastorius, John Entwistle, Sammy Davis Jr., Percy Sledge and many others. The weekly show is now in it’s 30th year and has influenced the broadcasts of David Letterman and others. Billboard Magazine hailed Jon’s show as “The Alternative to MTV”. LINK http://youtu.be/7TApELTO1XI Head Phone

MY HOME AWAY FROM HOME

In Memory of Lew Soloff, late great and much loved musician trumpeter from New York. Part 1 condensed clip from Jon Hammond in his chair – at The John C. Borden Auditorium Manhattan School of Music June 8, 2015 http://www.HammondCast.com
– *Release from Lew’s manager: 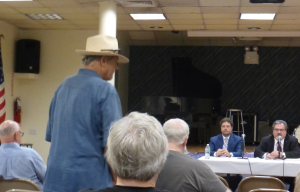 Jurisdiction
Greater New York, all of Long Island, and Poundridge in Westchester County. The following in Orange County: Deer Park, Greenville, Minisink, Unionville, Otisville, Mount Hope, Wallkill, Wawayanda, Hamptonburg, Goshen, Chester and Warwick. All of Sullivan County. In Connecticut: Townships of Greenwich, Stamford, Darien, New Canaan, Norwalk, Westport, Wilton, Fairfield, Bridgeport, Stratford, Trumbull, Easton, Weston, Ridgefield, Redding and Monroe in Fairfield County; all of Milford Township except Woodmont in New Haven County. In Pennsylvania: All of Damascus Township in Wayne County, which includes the villages of Damascus, Tyler Hill, embracing the Wayne Country Club, and West Damascus, lying north of but not including the villages of Fallsdale and Milanville.

JON HAMMOND Instruments: Organ, Accordion, Piano, Guitar Attended: Berklee College of Music 1974, City College San Francisco Languages: English, German *Jon is currently Host of daily CBS radio program HammondCast on KYOU & KYCY 1550AM 7 days a week. *Performing in Hospitals, Nursing Homes & Prisons every month in addition to concerts world-wide. *Musician: Jon Hammond is one of the premier B3 PLAYERS in the world. Jon has played professionally since age 12. Beginning as a solo accordionist, he later played Hammond B3 organ in a number of important San Francisco bands. His all original group HADES opened shows for Tower of Power, Quicksilver Messenger Service and Michael Bloomfield. Eddie Money and Barry Finnerty became musical associates. Moving East he attended Berklee College of Music and played venues as diverse as Boston's "Combat Zone" in the striptease clubs during the '70's and the exclusive Wychmere Harbor Club in Cape Cod, where he was house organist and developed a lasting friendship with House Speaker Tip O'Neill. He also toured the Northeast and Canada with the successful show revue "Easy Living", and continued his appearances at nightclubs in Boston and New York. Subsequently Hammond lived and traveled in Europe, where he has an enthusiastic following. *TV/Video Producer: In 1981 Jon formed BackBeat Productions. Assisted by Lori Friedman (Video by LORI), the innovative TV show "The Jon Hammond Show" became a Manhattan Cable TV favorite.
View all posts by laterent →
This entry was posted in Documentary. Bookmark the permalink.